The Iowa Rural Development Council – and Iowans across the state – are remembering Jim Erb, whose death November 5 at the age of 80 leaves a void among rural leaders, community champions and especially among those in his beloved Charles City.

Erb served as mayor of Charles City for more than 22 years.  In that role, he brought a vision and energy that had a profound impact on his community.  But his service went far beyond the city limits.  He served on many boards and commissions and was a leader of the Community Vitality Center, an Iowa State University initiative that focused on rural entrepreneurship and philanthropy.

“Mayor Erb was always a positive influence, interested in innovative and actionable strategies for rural community development leaders,” Edelman said.  “He persevered in looking for new ways of getting things done. The first conversation I had with Mayor Erb decades ago was about a three-way Charles City, Floyd County, and State DOT collaboration on a joint vehicle maintenance shop to efficiently serve all three levels of government and save taxpayer dollars.  He had the respect of many agriculture and city leaders from across the state.  He was a great friend to many and will be sorely missed.”

Mayor Erb was among 13 Iowans recognized by the Iowa Rural Development Council (IRDC) this summer as a “Rural Champion.”  He is also a member of  the Iowa League of Cities Hall of Fame.

“Mayor Erb’s passing leaves a huge void in both Charles City and Iowa,” said IRDC Executive Director Bill Menner.  “He was a visionary who push small towns to think big – and pushed their leaders to think even bigger.  The photo below shows Mayor Erb at a 2011 White House Rural Economic Forum that was held in Peosta, IA.  Here, he poses an idea and a challenge to US Agriculture Secretary Tom Vilsack.  That was Jim Erb – full of ideas and challenging others to make rural America vital and vibrant.” 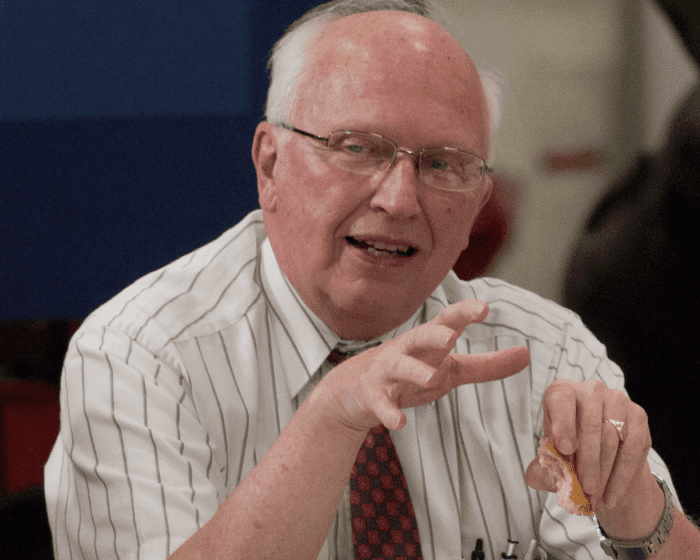